The Peddler is a salesperson who sells caps to make his living. His name is Pezzo (petz-o). The Peddler likes to carry his caps on his head so that he is free to shake hands or wave or occasionally carry his lunch. 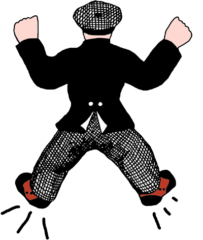 The Peddler is short of stature and has black hair and wears a mustache. Although he is a very nice and good-hearted man, he does have a temper. When things do not go his way he will often stamp his feet and sometimes jump up and down. He does try to stay calm, but that hardly ever works.

The Peddler lives in a three room house. It has a living room and kitchen downstairs and a large bedroom upstairs. The house has a small attic. 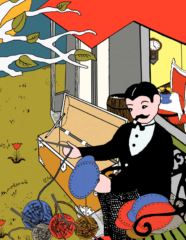 In the backyard there is a big tree. Outside the Peddler’s backdoor is a bench that he sits on in the evenings while he makes caps to sell the next day. There is a trunk by the bench where the Peddler stores all the things he needs for sewing the caps; the needles, thread, and the colorful cloth. Outside the back door the Peddler also keeps a trash barrel for scraps and garbage.

The Peddler lives in a small town that is surrounded by water on three sides. The land is called a peninsula (pen-IN-su-la). There is one road that leaves the peninsula which leads to the mainland. 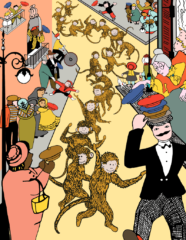 The Peddler sells his wares in and around his small town. Once in a while he leaves the peninsula and travels to larger towns. Things happen there, but that is for another time.

The Peddler likes to live in a very organized fashion. He certainly does not like when things change.

MONKEYS! Look out! These mischievous but mindful animals will be spending a lot of time with the Peddler, whether he likes it or not!